As the New Year begins and we enter the fifth year of this economic malaise, it appears that people are beginning to adjust to this new realism.  While the economy has shown some signs of improvement, [i.e. fifteen months of consecutive job growth], the overall feeling among most individuals is that things might get better eventually, but there is no sense in expecting that to occur anytime soon.  No longer are folks waiting for a full blown, wide reaching recovery that never seems to materialize.  Instead, it is as though we have developed an immunity to the negative backdrop and have become comfortably numb with this new economic condition.

Twenty-two years ago, the rock band Pink Floyd came out with their legendary album titled “The Wall” on which one of the single tracks was “Comfortably Numb”.  Roger Waters, the bands bassist and lyricist of the song,  recalled that “the genesis of the song stemmed from an experience I had when I was injected with tranquilizers for stomach cramps by a doctor prior to playing a Pink Floyd show in Philadelphia during our 1977 tour”.  Waters recollected, “that was the longest two hours of my life.  Trying to do a show when you can hardly lift your arm.”  (Rolling, 2012)

In dealing with our economic hardship, or stomach cramps as Waters put it, a combination of years of bi-partisan political ineptitude coupled with the unexpected elongation of this economic downturn have both served  as the economic tranquilizer for society.  The longer the economic disorder lasts, the more accustomed, or immune we become to this condition, and it emerges as our new actuality.  The result is that we really do not feel better, but rather have become numb to all the economic chaos.

One prediction I feel comfortable making for this year is to expect more false promises and inaccurate accusations from both ends of the political spectrum.  We are about to get another injection of political maladroitness, as the 2012 presidential election process heats up.  However, the reaction this time around will be different because society has changed, and wishful thinking no longer feels reasonable.

A long-standing core attribute of American society and the beliefs of its citizens has been the notion that those who work hard can achieve success.  In addition, parents have felt hopeful that their children will have an opportunity to achieve greater economic prosperity and opportunity than their generation did.  It is because of this belief matrix that Americans have tended to be more accepting of rising rates of inequality over the past four decades or so.  Back in 2006, we began to see the signs of this belief system falling apart.  The Pew Research Center reported, “the idea that each generation of children will grow up to be better off than the one that preceded it has always been a part of the American dream” (Pew, 2006). 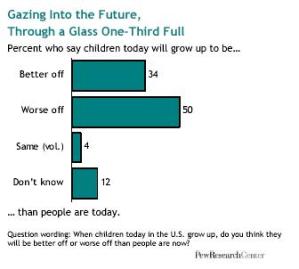 According to the 2006 Pew study, about half of the adults surveyed said that today’s children will grow up to be worse off than people are now.  More recently, in May of 2011, New York Life Insurance sponsored a similar study and found that “Just 41% of parents surveyed believe that children in the United States will have a better standard of living than their parents” (New York Life, 2011).

These reports reflect a sense that being able to achieve the American dream has become increasingly difficult.  Economic mobility is the ability to move up or down the economic ladder.  Economic mobility in the United States has narrowed considerably in recent decades as income inequality has increased.  A recent New York Times article about income inequality and the mobility gap in particular, eloquently addresses this topic. Jason DeParle (2011) points out that “While liberals often complain that the United States has unusually large income gaps, many conservatives have argued that the system is fair because mobility is especially high, too: everyone can climb the ladder.  Now the evidence suggests that America is not only less equal, but also less mobile” (DeParle, 2011).

There are many reasons for this diminishing rate of economic mobility.  Some point to unfair tax policies, while others point to the fact that college tuition costs are increasing at a faster rate than health insurance.  One fact however, that cannot be ignored is the unprecedented level of poverty that has emerged over the past 12 years. DeParle added, “One reason for the mobility gap may be the depth of American poverty, which leaves poor children starting especially far behind”.

The U.S. census bureau reported that as of the end of 2009, a record 44 million (14%)  Americans were in poverty, or 1 in 7.  The average class size of the courses I teach in college approximate 35 students, which means that at least five of those students are living in poverty. Of course, depending upon which school I am teaching at will affect this statistic.

As the presidential election process unfolds, you will certainly hear politicians from all stripes talk about this problem.  You will also hear politicians and others spending wasteful time and energy distorting the realities of this data.  Those in opposition to the incumbent will invariably try to paint a picture, which will imply that the poverty problem is due to his policies.  In these instances, one only needs to look at the graph above and you will see that at the end of 1999, the poverty rate stopped falling and has moved sharply higher over the subsequent ten years.  Within the domain of social science research, the observed patterns are not typically, what are of interest, but rather what can be infered from them.  Rather than talking about who is to blame for the untenable level of poverty today…attention, effort and debate needs to shift quickly toward the societal effects and inferences of poverty.  This will go a long way toward addressing the poverty problem, and will keep people interested and engaged in the political debate.  In my humble opinion, people want solutions, not finger pointing and anyone who sways from this path will lose the attention of the majority who have already become comfortably numb.